When Magdalena suggested we should aim for 2 x 25 km as a good preparation for our Camino, this event seemed designed for us and we signed up to walk 50 km in total over two days. Even the weather cooperated with a cold front coming through and dropping the temperature from the mid thirties to below 20C for both days.

AJ and I were in the third of the four buses that left Limehouse and dropped us off on the Credit View Road side of the Cheltenham Badlands. Most of the 160 people were pretty serious about speed and very soon we were at the back of the pack. We took a 15 minute break at the first check point and by the time we arrived at the 2nd one they were wondering what happened to us… No more rest stops for us!  (I was doing a speed of 3 km an hour and AJ was nice enough to keep me company.) Because of road construction in Limehouse the first day ended up to be 30 km long and I decided at check point 3 (24 km) that I would call it a day and then just make up that section the following day. AJ managed to finish the full 30 km back to Limehouse. I was so impressed! Our feet were pretty tired and sore and AJ had a few blisters too. I was walking with Keen shoes and Wright socks and was very happy with the result.

The second day we made sure to be in bus 2 so that we could start more in the front of the pack. Hopefully then we would not be last to arrive at the check points and have them wait for us. We started walking at Limehouse and walked back to Hilton Falls. Our strategy worked! We managed to stay in front of about 5 people this time. We were even able to take a few breaks. We started to see some people who we had met the day before and by the end of the hike I had two new Facebook friends. (Who knows, we might even do a few hikes together since we seem to walk at the same speed.)

The road was pretty rocky so the inside of our thighs were really feeling the strain. We were prepared for preventing cramps by eating a banana before we started and putting electrolytes in our drinking water. No cramps today! You really had to watch your step and even so, I fell quite hard onto my hands and knees at one point – luckily in between some rocks onto some sand. I was so glad that my wrists were not inside those trekking pole loops!!

We crossed the 40 m long bridge that spans the gap in the Niagara Escarpment. AJ had looked up some information about it beforehand and told me that the idea of protecting the Escarpment and creating the Bruce Trail Conservancy started when the quarry caused that very unsightly gap. It took quite an effort to get to the bridge. The trail followed the edge of the escarpment and is fairly steep to start with. The wind was pretty strong and AJ had to battle his fear of heights. I am glad we did it, since now we have had a close up look at the quarry site that has always been kind of a mystery to us.

We had a cheering section all the way from where we emerged from the trail all across the clearing to where the tea and shortbread cookies were waiting! They made us feel so special. We received our ‘walking fern’ end-2-end badges and the pictures were taken with very broad smiles!! We felt so accomplished and happy. Now we could go home and put our feet up.

That is, I had an hour to relax and then I had to go walk the 6 km that I skipped the first day. I walked it all by myself and was home just as it was turning dark, but I did it!

This weekend was planned to prepare me for 10 days of walking in Spain. Now I know what it feels like to walk 25 km in one day and do it again the following day. It makes you think that anything less than 25 km is not so bad. It’s just a matter of perspective. I know now that it will hurt, but that I can do it. Now I will have to decide whether I need to walk every single kilometer, or whether taking breaks to make friends and to take pictures is also important… Time will tell. 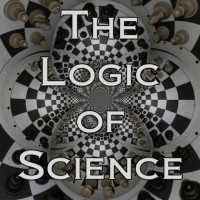 "What you give to the world is what it keeps of you."

The Logic of Science
Wandering Dave