We met the other hikers in the parking lot at the Terra Cotta Conservation Area early on Saturday morning. It was well organized. 68 people showed up and we were split up into two groups that would do the loop in opposite directions. Each group had a leader at the front and a sweep at the back. We also had to sign sheets with our names, telephone numbers and emergency contact information. So after the necessary bathroom visit and the application of bug spray against the mosquitos, ticks and black flies, we were off!

The group spread out pretty fast with the younger and fitter people in front and the slower ones at the back. I was in the middle to start with, but as soon as we hit the first uphill slope I decided that my speed is more suitable for the back group. I found a stick to walk with and for the most part walked by myself. I am not really the talkative kind… Since we were with a group of people today, this was something to get used to. Some people just like to talk! The one lady who was chatting away says she even does it when she hikes on her own! I found it quite annoying in the beginning and tried to concentrate on the sounds of the wind and the birds until I got more used to people talking. When I walked with Jacob who is deaf and AJ, my son, who doesn’t talk much, I never realised that it is actually quite unusual for people to be silent.

The hike included a brand new trail that has been 8 year in the making. Prior to 2010, the main trail went around the edge of a quarry, but in the Spring of 2010 the quarry owners asked the BTC to move the trail off the property since they were planning an expansion of the quarry. In 2015-2016 the BTC negotiated a severance arrangement and this transaction closed in June 2016. The newly acquired property is called the Lan Kwan Sum Nature Reserve which lies adjacent to the Terra Cotta Conservation Area. After work parties scouted and cleared the trail route, permission to open was received in the fall of 2017.

We found another person (Richard) in our group that was going to do a part of the Camino at the same time as us, but at the other end at St Jean Pied de Port. He has also never been there and will only be there for two weeks. Richard is a veteran on the Bruce Trail (his own words) and definitely older than me. He was also part of the slow part of the pack which gives me hope for myself. Alina, the sweep, said that keeping an even pace is more important than speed anyway. She has done the whole Bruce Trail end-to-end and has the badge to prove it!

We also met Magdalena who was volunteering to help people sign up for the BTC membership. She has done the Camino three times already. She had plenty of tips and advice. She said that since our longest hike on the Camino would be 25 km, then that would be the goal to work towards beforehand.

She asked us whether we were members of the BTC and when Tanja mentioned she still had to sign up, we had such a wonderful surprise! It turns out that if you signed up after today’s hike you receive the current edition of the Bruce Trail Map for FREE!!! My maps are still from 2004. We  can now use up-to-date maps when we plan our hikes. This will provide so much more peace of mind. 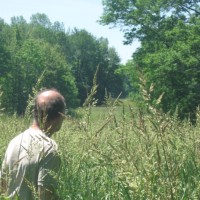